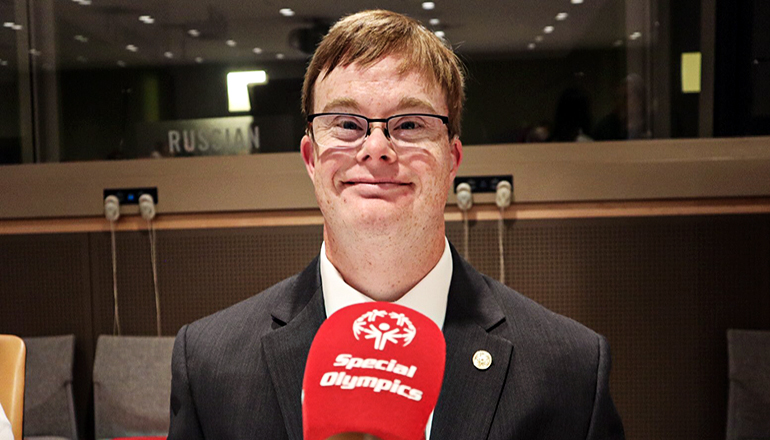 Special Olympics Missouri is proud to announce that Jared Niemeyer, SOMO Board Member and Athlete Leader, has been selected to represent Special Olympics, June 10 in New York City, on the first-ever all-athlete panel for the 12th meeting of the UN Conference of States Parties for the Convention on the Rights of Persons with Disabilities.

The panel will be comprised of a total of 5 Special Olympics athletes who are accomplished leaders in sports, health, human rights, youth engagement, media, employment and advocacy for persons with intellectual disabilities. The panelists will discuss how sports helped them develop skills and gain the confidence to exercise their rights and take advantage of opportunities. This panel will showcase the talents of our athlete leaders in a way that will eventually impact UN governance and decision-making.

The Convention on the Rights of Persons with Disabilities is a human rights treaty adopted by the United Nations (UN) General Assembly in 2006. The CRPD is a legally-binding agreement between the Member States who have signed the Convention to uphold, promote and protect the rights of persons with disabilities as defined in the treaty. Article 40 of the CRPD stipulates that States Parties (signatories to the Convention) shall meet regularly in a Conference of States Parties (COSP) to consider any matter with regard to the implementation of the Convention. Since 2008, the COSP has been held annually at the UN headquarters in New York, covering a range of themes and issues in round-tables, interactive dialogues, and side-events.

The overarching theme of the 12th session of the UN Conference of States Parties is Ensuring the inclusion of persons with disabilities in a changing world through the implementation of the CRPD.

Jared Niemeyer is a Special Olympics Missouri athlete who has been participating since he was 9 years old. Currently, Niemeyer plays the following sports with SOMO: Unified softball, basketball, bowling and track and field.  “Special Olympics has given me a lot of opportunities – it’s made me a better person,” he said.

Niemeyer is a 2011 graduate from Kirksville High School. In addition to working at his local Hy-Vee store, he is active as a member of the St. Joseph Catholic Church and Knights of Columbus. He has served as a state and national Youth Activation Council member and had remarkable opportunities because of Special Olympics, which includes: participating in the 2010 and 2014 USA Games in Lincoln, Neb., and Princeton, N.J., respectively; speaking at the United Nations Convention on the Rights of Persons with Disabilities in June 2014; and as one of 14 Special Olympics athletes nationwide attending a “Unified Generation” program at the White House.

As a trained Global Messenger in addition to speaking at the United Nations and meeting President Obama, he has been afforded the opportunity to travel around Missouri and speak with different organizations about what SOMO is and how it affects his family.

U.S. Senator Roy Blunt of Missouri said, “Through his athletic accomplishments and dedicated advocacy, Jared Niemeyer has shown the world what people of all abilities can accomplish when they have the opportunity to participate. I couldn’t be more proud to see him once again headed to the United Nations to promote inclusion across the globe. I was at the Special Olympics World Games, and it was clear the organization can bring people of all nations together in a uniquely inspiring and transformative way. I know Jared will do a great job sharing that message.”